As much as I love wine, I love good theatre too, so for the past two years, Colin and I have had a mini escape for a matinée at the Stratford Festival, two nights in Niagara-on-the-Lake, a wine tour, a performance at the Shaw Festival and some solo wine touring on the way home through the Niagara Escarpment. This year we brought our bikes to cycle the trails along the Avon and around Fort George.

The plays were King Lear with Colm Feore, incredible, and Arms and the Man, a delightful saucy comedy. The accommodations were Mary’s Street Bed and Breakfast, very affordable,  with great food, a comfortable room, a private patio and extremely helpful owners. The restaurants, were the Stone Road Grille, and the Epicurean which both served interesting food at reasonable prices for the quality. The prices for a glass of wine were surprisingly high at both places.

Our half day wine tour was with  Niagara Vintage Wine Tours this year. Their very large comfortable bus picked us up at the B & B and we were warmly welcomed by our guide, Gus Bagarozza.  He provided us with a geological and social history of Niagara and a lot of information about the wine industry. A retired teacher, Gus is an amateur winemaker himself and so keeps up with what’s new in the industry while conducting tours.  Our group included a combined family of seven from Canada and Ireland who were on their first ever wine tour and were there as much for the joy of spending time together as the experience of wine touring in Canada and a couple celebrating their 17 th wedding anniversary from Port Dover.

The great wall at Southbrook

Our first stop was Southbrook Vineyards, a highly acclaimed winery that has been an industry leader in organic and biodynamic viticulture. The Southbrook guide explained some of their organic practices which included grazing sheep between the vines to keep the grass down, provide manure and trim the vines, letting clover and dandelions grow to encourage the presence of lady bugs, spiders and birds that feed on insects that infest the vines. They also grow nettles and camomile to make teas that fertilize the vines and discouraged pests. When the grapes are ripened, the sheep are moved and the grapes covered with nets to keep off the birds. Their energy sources are primarily sunlight and geothermal.

I’d heard from Maggie, the assistant wine maker, at The Grange of Prince Edward  how biodynamic practices can include rather witchy things like  burying cow horns filled with cow manure at certain phases of the moon. I half expected denials but instead our host explained that the cow horns are dug up in the spring and the well rotted manure now  included the bone meal from the horns and made highly potent fertilizers.

The tour included wine and cheese pairings to emphasize how wine compliments the taste of different foods. Often wines that don’t appeal as  “a sipping wine” are ideal table wines enhancing and balancing the flavours of particular foods.

Southbrook has a range of organic wines in everyone’s budget, its Connect line for easy drinking is priced in the teens, its Triomphe wines are in the mid twenties, its Whimsy wines which are the winemaker’s specialties are in the high thirties, and Poetica its top estate reserve wines made only in the best years are in the $40-$50 range. We bought a Triomphe Chardonnay and three bottles of Triomphe Cab Merlot

The visit to Southbrook was made even more special by a chat with owner Bill Redelmeier. Bill had been the Keynote speaker at the Atlantic Wine Symposium in 2012 and we talked about the impact his winemaker, Ann Sperling, and her partner Peter Gamble had had on the Nova Scotia wine industry.

Our next stop was Pilliteri  Estate Winery, Canada’s largest producer of Icewine.  The Pilliteri family have wine growing roots that go back centuries in Sicily and Gary and Lena Pillitteri keep those memories alive with the symbol of the Carretto, a painted Sicilian hand cart, on their labels.  Entering the winery, we came face to face with their impressive trophy gallery with its display case of  icewines made over the years and the many awards.

I saw among them the distinguished Effervescence du Monde awards from France. Bruce Ewert from l’Acadie Vineyard  in Nova Scotia had taken silver in 2012 at this event  for his traditional method sparkling and been the only North American winery honored that year. Pilliteri have four awards from Effervescence du Monde including  Gold Best Overall for their sparkling Cabernet 2008  icewine in 2009 and Grand Gold for their 2004 Sparkling Vidal in 2005. 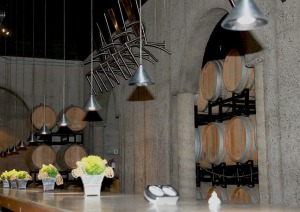 The cement table and family chairs in the Pilliteri barrel cellar

We had a tour of their unique barrel cellar with its  poured cement banquet table and hanging ornamental stainless steel chairs each patterned with symbols to represent a member of the Pilliteri dynasty.

Finally we got to the tastings. I’ve had Vidal icewine often before with its liquid gold flavour but the Cabernet Franc icewine was a totally new taste sensation and I was curious to try the sparkling icewine as well. It is not usually offered in tastings due to its high price point.

Fortunately Jeff Letvenuk,  their marketing manager, dropped in to say hello and with a little pleading agreed to open a bottle of 2011 sparkling Vidal for our group to taste. It was amazing!  The effervescence really lightened the strong sweetness of the wine. Unfortunately it was not for sale or we all might have bought a bottle despite its $80 price tag. I left with a bottle of their Cab Franc icewine, icewine chocolate truffles and a bottle of Jalapeño Chardonnay drizzle for cooking and salad dressing.

Gus seemed to realize his passengers were beginning to show the effects of more wine than food and so we stopped at a farmers market to chow down on bruschetta to soak up some of the excess alcohol. 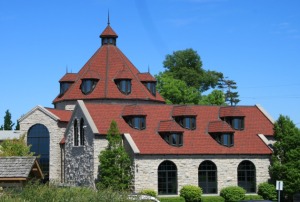 The day ended at Konzelman Estate Winery.the third family owned winery of the day. While they set up for us, Gus gave us a demo in the vineyard of how European vines are grafted on native Canadian root stock  to ensure that they can be protected against phylloxera. A local greenhouse does a booming business in selling grafted root stock to local wineries in a wide range of European vinifera.

Our Konzelman  host gave a talk about how to do tasting and the importance of aerating reds. Interestingly, I know how to do a wine tasting  but I always skip the first three steps and have an initial sip and them do the swirling, sniffing and swishing.  Our host actually recommended doing that saying the first taste didn’t count, it just set up your palate.

Part of the presentation included the drinking of a glass of celebration wine from a glass slipper for our anniversary couple from Port Dover.

A glass slipper of wine to celebrate

Konzelman are extremely proud of their Riesling and wide range of whites. They even do a Riesling icewine. They are, also known for their peach wine, a wonderful light fruit wine that works well for cooking as well as drinking.  Being fond of whites, I went a little crazy there and bought a Riesling Traminer, Gewürztraminer, peach wine, Pinot Grigio and, as a concession to my husband, a Merlot along with an aerator pouring spout.

Lovely day, good company, excellent winery presentations and many of those special extras and insights that you only get on an official wine tour. Thanks Gus and the folks at  Niagara Vintage Wine Tours for a truly enjoyable afternoon.

Twitterings at the Atlantic Wine Symposium  from examiner.com