Dan Tweyman is the nearly new winemaker at Trail Winery. I met him Saturday at Terroir  2015 in Picton. Prince Edward County. He is one of four new winemakers that I met at Terroir.

It was a marvelous day: 21 wineries, 35 other vendors with foods, pickles, preserves, cheeses and chocolate. The sun was shining, it was over 30 ºC and packed with people happily buying wine and goodies. Terroir is the start of wine seasons. 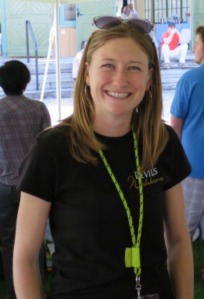 Well actually no,  I don’t spit. I’m a wine tourist not a connoisseur and I have no idea how one goes about spitting out 42 splashes of wine.

First of all, I was brought up by a mother who firmly drilled it into me that ladies don’t spit. Secondly,  half the tables at Terroir didn’t even have a container to pour out excess wine. I did pour out every thing but the first taste wherever possible and I did ask just for a tiny splash not the regular 2 oz tasting.

How do you spit out wine inconspicuously at a crowded function like Terroir?  I can’t spit directly into their little surplus wine receptacle  – that would be gross!

Unfortunately, my capacity for wine does not exceed two glasses at one sitting, so Terroir is hard on my system and my husband usually has to guide me off the grounds before I pull a Rob Ford drunken stupor scene.

After 42  splashes of wine there are only two kinds of wine – red and not red – and they all taste the same. Some have snazzier labels. After 42 splashes of wine you cannot remember where you tasted that glass of something-or-other that you really liked when you first arrived but didn’t want to haul bottles around all afternoon.  The fact that I remember Dan’s name is a minor miracle.

I do distinctly remember stopping by the booth of my friend Liz Lacey of Lacey Estates Winery and trying their Gewurz which was blissfully good even though it was splash #37. Then being told I couldn’t buy a bottle because their table has a mix of VQA and non VQA wines and so they were not even allowed to sell their VQA approved Gewurz because it might have been contaminated by the proximity of those low-life non-VQA bottles next to them.  I came very close to a Rob Ford rant. 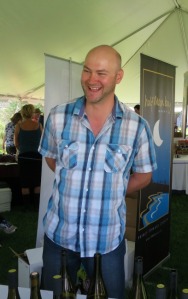 Sadly, The Grange didn’t make it so I settled for the next best thing, a chocolate cupcake infused with their Pinot Noir by Iced CupCakery. By that time, I’d forgotten that I was supposed to be gluten free.

After 42 splashes of wine, the fact that there are five wineries I hadn’t visited yet was totally irrelevant. It was time to go home.

All photographs supplied by Colin Leonard who Thank God is also always my Designated Driver.

This has always been one of my favourite blogs but so many of the players have moved around in the intervening years.

“My new best friend” Dan Tweyman is no longer in the winemaking field according to his linked in profile.  MacKenzie Brisbois replaced him as winemaker and viticulturalist at Trail Estate Winery a few months after this blog was posted and has been there ever since. Their wines have received national recognition in the All Canadian Wine Championships and other wine competitions since she’s been there.

Dave Frederick is no longer Associate-Winemaker at By Chadsey’s Cairns and has opened Strange Brewing Studio on the Chase Rd. Prince Edward County. It produces a beer-wine hybrid, that has to be tasted to be believed.

Mike Traynor at Traynor Family Winery has spearheaded the production of “pétillant naturel” pet-nat wines in the County – sparkling wines  that do not have their lees disgorged and leave a drift of sediment in the bottom of the bottle. Mike is also a mentor for Jon Drew, owner- winemaker at Rolling Grape winery in Peterborough County which opened in 2018.

Paul Battilana, the former winemaker at Casa Dea Estates, is now the winemaker at Sandbanks Winery following its sale to Arterra Wines.