Tasteful Women of the County

It’s a scientific fact that women have more taste buds than men. In fact 35% of women qualify as ‘super tasters’ and only 15% of men but most of us know good when we taste it. Winemakers are super tasters, or they wouldn’t be in business long. Another interesting fact: the majority of LCBO wine purchasers are women age 40 and older, Which might add to the success factor of women winemakers.

While researching a recent article for County and Quinte Living Women of the Grape,  I had the privilege of meeting fourteen of those Super Women Tasters  who work in winemaking in Prince Edward County, Ontario. Not only do they make great wine but they have added significantly to the development of the County as a respected wine region.  The first five are part owners of the wineries as well as winemakers.

Sadly, I did not get to interview Deborah Paskas,  the high priestess of County wines, but I had seen her in action at a Verjus  Pruning Party at Closson Chase several years ago and she was in a class of her own. People I have interviewed recently said that serious wine collectors in Canada feel their cellar is not complete without Paskus’ Chardonnay or Pinot Noir wines. Deborah retired from Closson Chase  last December.

Catherine Langlois and her assistant winemaker Jacklym Boyd at Sandbanks

In total contrast, I caught up with Catherine Langlois of Sandbanks Estate Winery who is the most commercially successful winemaker in the County.(Sandbanks Winery – Catching the Wave)  Catherine confided that when she first started many of her blends just sort of happened because she didn’t have enough of any one grape variety to fill a tank. The benefits of success, is that she now has a large number of single varietal tanks so she can play with the blends getting the perfect taste to suit her target  buyers.  Catherine has recently hired Jacklyn Boyd, a recent graduate of Niagara College, as her assistant winemaker.

Vida Zalnieriunas, winemaker at By Chadsey’s Cairns, started around the same time in  the late 1990s. Along with her husband Richard Johnston they have been the driving force behind Wassail, and County wide wine events. Vida challenged herself to try new wines and new winemaking techniques. These days her Associate winemaker Dave Fredericks shares the load as Vida and Richard try to ease into retirement.

At County Cider, Jenifer Dean plays a vital role in this hugely successful enterprise. Originally hired as a winemaker, she increasingly became involved in the cider making alongside her late partner Grant Howes. Grant credited Jenifer’s meticulous attention to detail and understanding of taste profiles that appeal to women as a big part of their success. In 2009, they brought in Dannielle Davidson a biotechnologist to join the cidermaking and management team. County Cider which produces 400,000 litres of cider a year, is the largest cidery in Ontario and possibly Canada. 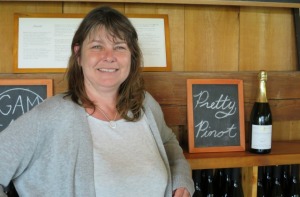 Caroline Granger attended the wine technician program alongside Jenifer at Loyalist College, looking to add a new income source to the family farm on Closson Road. Early on she  became the County representative on the Wine Council of Ontario pushing for DVA (Designated Viticultural Area) status for the Prince Edward County wines. Caroline’s daughter Maggie Belicastro in now  the associate winemaker at their beautiful  Grange of Prince Edward Winery. The two produce distinctly different wines from each other  In France it is traditional in family wineries to see the label Pêre et Fils (Father and Son) on wine labels, Caroline is toying with the idea of adding Mêre et Fille  (Mother and Daughter)  to Grange labels. 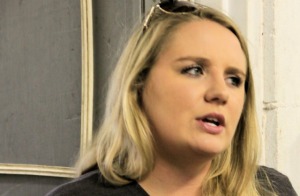 Waupoos Estate winery was one of the first to hire a woman winemaker, Amy Mumby, who introduced some of their signature wines: Honeysuckle, Maple Icewine, Vidal Icewine and their White and Red Rabbit  wines. She left the winery in 2011 when it was sold to new owners and another Amy, Amy Dickenson now Baldwin, took her place.  A Niagara College graduate Amy Baldwin now has 38 wines in the Waupoos portfolio as well as fruit wines and ciders for Clafeld Fruit Winery and the Big Apple in Colburne.

Lauren Horlock passing the wine thief to Harwood’s next winemaker.

Lauren Horlock fell in love with the wine industry when working at Huff Estates in 2002 and headed for the wine program at Niagara College. She returned in 2006 and started winemaking  at Hillier Creek. After five years she moved on to Harwood Estates. Her wine skills put both wineries on the map in their start up years winning numerous awards. Marriage took her away to US in 2012 but she is remembered fondly by many PEC wine lovers.

Kerri Crawford grew up in Hillier and first got hooked on wine working with Caroline Granger and Maggie Belicastro at the Grange of Prince Edward. After graduation from Niagara College, she headed on the road to work the harvests in Niagara, California, Australia and New Zealand.

“Wine making is very hard and often dirty work which might be why it’s less attractive to women. When you work two harvests a year, northern and southern hemispheres,  you are always dirty and running on a couple of hours sleep a night.”

In 2013 she came back to Canada to work the harvest with Dan Sullivan of Rosehall Run and has been there ever since. They have completely different styles, Dan is a prominent County winemaker known for his Chardonnay and Pinot Noir but has been mainly self-taught. Kerri’s training and international experience has allowed her to bring some new ideas and best practices to the winery.

Two of the new generation of women winemakers, credit Norman Hardy with their start in the industry as he provided mentoring and guidance during their initial internships.  MacKenzie Brisbois is now the winemaker and viticulturalist at Trail Estate Winery. MacKenzie is the glamourous lady sipping her glass of Trail Estate wine at the top of this blog. commenting “If only I ever had time to just sit and relax like this!”

Lucie Trepannier another international harvest hopper is harvest assistant at Keinte-he.  Like Norman Hardie, Lucie comes to winemaking from a sommelier background. Although only at Keinte-he for the season, she hopes to find a future in winemaking in the County.

Kimball, and Liz Lacey with their Wassail Crowns with their daughter Emily

When I stopped in at Lacey Estates winery during Wassail last year, I met Kimball and Liz Lacey’s daughter Emily who was busy assisting her Dad in the winery. Her parents had just been crowned King and Queen of Wassail by the PEC Winegrowers Association but Emily was definitely the princess. Emily has been planting and picking grapes since she was six years old. Under the guidance of her winemaker father, Kimball, she produced her first wine at age 17 and went on to take viticulture at Niagara College.

Although their male counterparts tend to get the most attention from wine commentators,  women like Deborah Paskus, Caroline Granger,  Catherine Langlois, Vida Zalnieriunas, and  Jennifer Dean, have had a huge impact on the development of the Prince Edward County wine region and the new generation of MacKenzie Brisbois, Emily Lacey, Amy Baldwin, and Maggie BeliCastro are following in their foot steps.

These women have great taste, look for their wines when you are touring in the County.