Grapes are rolling in Peterborough

Rolling Grape Vineyard had only been open eight weeks when I visited with a group of travel writers. A winery in Peterborough County is as unexpected as ZimArt an outdoor African sculpture gallery or  The Indian River Reptile Zoo but will probably prove to be just as successful.

No one goes into winemaking on a whim. Jonathan Drew’s family have been farming in the Baillieboro area for generations and so Jon knew the “terroir” well before hiving out ten acres of the family farm to plant grapes seven years ago. He wisely selected specific cold climate grapes to start and has been gradually adding other hardy hybrids and cold climate vinifera to see what will survive and thrive including Marquette, Frontenac, Vidal, Cabernet Franc, Petite Pearl, and Pinot Noir.

A longtime amateur winemaker, he is now honing his skills on a larger scale under the mentorship of Mike Traynor of Traynor Family Vineyard in Prince Edward County. The two men had worked together previously in the organic food business and his opening volley of wines are impressive both in their quality and experimentation.

Baillieboro and Prince Edward County have a similar growing season except the spring comes two weeks earlier in Baillieboro but so does fall, so it does not get the same amount of heat units as the County. Sticking to hardy cold climate grapes can overcome this difference.  Drew also purchased grapes from Niagara that he cannot grow locally to broaden his base of wine offerings 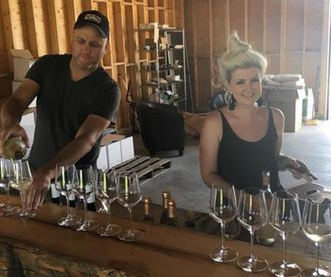 Jon Drew and Katie Dickson setting up for a crowd at Rolling Grape winery. photo supplied by Jon Drew

Jonathon Drew and his wife Katie Dickson opened their winery in early June of this year. After only four weeks, they sold out of  Amplified Orange a very trendy wine made from a blend of Frontenac Blanc and Gris grapes that had skin contact for a month during fermentation adding a dry tannic taste to this regularly citrussy white and creating a warm orange-gold hue to the wine. We had a taste from his reserve stock and it was certainly a crowd pleaser.

His signature wine, Marquette, is another Minnesota hybrid grape like Frontenac developed for our cold climate. It has not been widely used in Ontario but is gaining a lot of respect. As his debut red, it has been a great success. Barrel-aged in re-toasted French oak, it has notes of red stone fruit and pepper – a very satisfying red wine for summer evenings.

His Chardonnay made from Niagara grapes is a daring experiment for a new winery. The wine appears cloudy because it has been unfiltered which also alters the flavour profile a little.  Often winemakers offering an unfiltered wine will also make a filtered version so that buyers have two to compare but when you are dealing with small batch production that is hard to do.

The same can be said for the Baco Noir that is a very interesting red but also a little different than the usual flavour profile having been fermented with wild vineyard yeast rather than the standard commercial yeast.

It takes a great deal of courage to produce wine where it has not been done before and even more to be experimental in winemaking methods this early in the business rather than sticking to the same-old-same-old safe styles. Visitors hope for something special when they visit a winery and Rolling Grape certainly won’t disappoint with its unique wines.

The winery is open every weekend from Thursday until Sunday. from 11 a.m.- 6 p.m. A $10  tasting gives a sample of all their wines along with a locally produced food pairing to compliment the wine flavours. Their wine is only available for sale by the bottle and only at the winery. The building is a new large barn structure with lots of room to grow and evolve.

Rolling Grape Vineyard with a sculpture from ZimArt Gallery.- photo by V Leonard

There may be a little sticker shock as wines are priced between $26- $40 per bottle. Recent increases in wages, alcohol taxes and other costs of doing business have made homegrown Canadian wines considerably more expensive than imported wines from countries with lax labour laws. Although the winery is not certified organic, Jon is using organic practices so far with very little chemical interference in the growing process. The wine may cost more but the product is free from pesticides, has been hand harvested and is supporting local Canadian business. Well worth the extra dollars.

I bought a bottle of the Marquette, I’m going to let it age a year until I go back for replacement during the annual Lakefield Literary Fest in July 2019, another of those unexpected Peterborough County success stories.

If you want to linger in the area to discover all the many interesting offerings of Peterborough County, including craft breweries, a craft distillery, the historic Lift Lock on the Trent Severn Waterway or just enjoy the beauty of the Rice Lake area. I would strongly recommend nearby Elmhirst Resort, for its food, lodging, and amenities. This year-round resort has had 100 years to perfect its customer satisfaction. For more on Elmhirst visit my blog  Autumn Getaway with wine!

MyKawartha.com, a local news channel, posted a video interview with Jonathon Drew so you can virtually meet the winemaker in person https://www.youtube.com/watch?v=9IrCDSZQTUs&t=58s  If you’ve visited the winery please share a comment below.