I discovered this winter, that wines get seasick.

We had booked on a 19 day cruise through the Panama Canal on Holland America’s Westerdam  and I was almost as excited about exploring the international wine menu as our many ports of call.

The Westerdam’s wine list was an exciting assortment of wines from South America, Europe, Australia, New Zealand the States and even Mission Hill Merlot from Canada.

Wine tasting with winelovers from Victoria BC.

Surprisingly I couldn’t find a white wine that I liked.
I even went to a special wine tasting event and  a group of us savoured  five whites from a number of countries and none of us could actually identify a single flavour.  The reds were better especially the oaked and appasimento wines but the whites just didn’t cut it.

I might have given up on wine altogether if it hadn’t been for our charming Phillippine wine steward,  Mann, who made ordering wine enjoyable just by showing up.  Most nights, I chose red or sparkling wine.

One evening, he mentioned he had to attend  a workshop when his shift ended. Michael Standen, the ship’s Canadian Cellar Master, would be talking about Italian wines.

I managed to arrange an interview with Michael on our last day at sea, and came to realize why ocean-going cruise ships and white wines have a turbulent relationship. 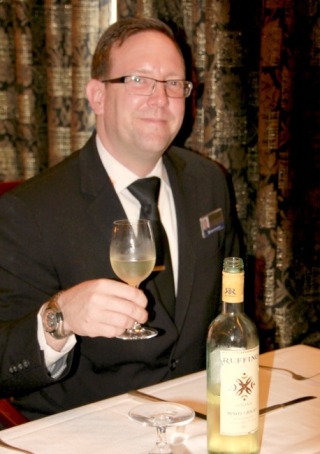 Michael’s from Hamilton,  Ontario. While at Niagara College for police training, he took a short bar tending course which changed his life. He landed a student job with Vincor’s WineRack stores.  An eye problem prevented him from continuing in police studies, so he switched to a diploma in retail management. His job with Vincor led him to a retail position at Inniskillin Winery  doing wine tours and tastings and learning all about the wine industry from its legendary owners Donald Ziraldo and Karl Kaiser.

He moved on to Magnotta Winery with wineries in Niagara and  Chile’s Naipo Valley. Magnotta also sold grape juice for home winemakers and he  helped people learn to make and test their wine.

In the fall of 2006,  he applied for a cruise ship position with Great Circle Marine  as a bartender. His winery experience seemed to interest them but he heard nothing from them until late February  2007,. He got a call asking when he could start. Two days later he landed in Curaçao to discover he was shipping out on the Queen Mary II as a junior sommelier!

During his two and a half years with Cunard, he took advantage of the training opportunities, taking courses through the Wine & Spirit Educational Trust WSET level, 1, 2 and 3 as well as his teaching certificate levels 1 and 2 with a focus on the industry side of the wine trade. He was often called on to fill in for the Chief Sommelier.  When his contract ended, he was offered a job on the new Queen Victoria as Chief Sommelier.

He returned home in 2010 adding prominent Niagara wineries Stony Ridge, Kacaba and Colaneri Estate to his resume. Then after, six years ashore, sea fever struck again and he signed on with Holland America

The Westerdam wine cellar holds between 9,000-12,000 bottles of wine which have to be replenished at various stops in the cruise. The selection of wine often depends on the make up of the passenger list and their preference for New  or Old  World wines. There is also a nod to the region being cruised, The B.C. Mission Hill Merlot was a leftover from the Westerdam’s previous Alaska cruise.  Only Canadian ice wines have made it into the collective consciousness of most cruise ship passengers, Mission Hill is the vanguard.

Price of course matters and there are “wine lakes” in France, Australia, and South America which supply very affordable wines  but may be part of the reason for bland blends in the lower priced whites. They did have one $1300 bottle of Lafitte but its not in high demand.

Unlike restaurants ashore which carefully cellar their best wines to reach peak maturity, cruise ship cellars work on a First On, First Out philosophy. Although temperature, and humidity can be strictly monitored, and they are stored in the centre of the ship close to the water line, motion is an uncontrollable force. Stormy seas or the higher speeds needed to stay on schedule mean that wines are frequently in motion. 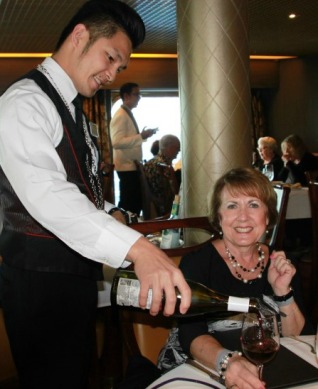 “We did an experiment comparing two cases of wine that were on board  with two cases left ashore and the seagoing wine had effectively aged twice as fast.  Barrel aged reds and  apassimento wines were not as adversely affected, as long as they were not kept too long but other wines would peak much earlier than normal.”

Whites fared better if they were oaked, sweet, or sparkling.  So the fact that I could not taste any distinct flavour in the wines I chose was not my  faulty palate, it was agitated wine.  Interestingly it explained why our sommelier regularly “iced” the reds before serving, just to calm them down and bring out the flavour.

Beer has is not affected much by the ship’s movement although it’s important to watch the expiry dates. Hard Liquor on the other hand has no problem with the ship’s movement. The classic James Bond martini is at its finest. as thoroughly shaken but not stirred.

Does the Canadian Cellar Master have favourite Canadian wines.

” I’m biased towards Kolanari, but I really like appassimento wines which were introduced into Canada by Big Head Winery,  Foreign Affair and Organized Crime, however I also enjoy visiting the small wineries, the Mom and Pop wineries where the heart and soul of the wine industry lives and where you find the real passion of the wine industry.”