Been there done that, tasted a whole lot of wine.

The Atlantic Wine Symposium 2017 runs from Sunday June 11-13 at the Westin Nova Scotian in Halifax, It includes wine tastings  winery tours, updates on the state of the wine industry in Atlantic Canada and workshops on new trends and wine making.

I had a foretaste of what was in store during my two day stay at  the beautiful Blomidon Inn in Wolfville when I managed seven winery visits with my husband Colin,who is my photographer and designated driver. For the record the 2016 vintage wines are sensational. 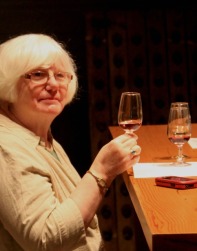 So many Tidal Bays, so little time

Since my last visit four years ago, there have been major changes. All the wineries are expanding their number of fields under cultivation and their winery facilities. While their popular hybrids like L’Acadie, Muscat, Ortega, Luci Kuhlmann, and others continue to be the backbone of the industry, more European vinifera are also being planted. Most wineries have set aside an acre or two for experimentation with new vines.

Nova Scotia’s short growing season and the acidic soils of post glacial tilth and sandy clay loam have also proven to be ideal for the production of traditional method and charmat sparkling wine. All of the wineries, I visited have one or more sparkling wines in their portfolio.

Part of their growth in wine sales can be attributed to their very popular appellation wine Tidal Bay, a crisp white wine that pairs well with seafood. Everyone’s Tidal Bay is different, usually a blend of specified hybrid and European viniferas. I managed to taste 9 of these in my travels.  In a taste-off earlier this spring Mercator Vineyards , Planter’s Ridge and Lightfoot & Wolfville were selected as this year’s top three. Two of the wineries are so new they are not even open to the public yet.

Pete Luckett also attributes the phenomenal growth in the sale of Nova Scotia wines to the wholehearted support of millennials who have gone with their taste buds instead of traditional brands in selecting their wines.

Since Pete opened  Luckett Vineyard in 2010, it has been an instant success. The view, the wine shop full of gourmet delights,  the outdoor  food pavilion,  winemaker Mike Mainguy’s great selection of close to 20 wines and, of course, their iconic Phone Box. A bright red English phone box in the middle of the vineyard.

You can use it to call anywhere in North America  for free or just to have your picture taken with your bottles of their signature blends, Phone Box White and Phone Box Red.  Everyone who wine tours in Nova Scotia remembers the winery with the red phone box.

The next stop  was  Domaine de Grand Pré Winery. Opened in 2000 by Swiss financier, Hanspeter Stutz, it was Nova Scotia’s first destination winery and is still the most beautiful, with a large retail shop, a five star onsite restaurant Le Caveau  and  the outdoor Pergola restaurant surrounded by flowers and gardens both run by his daughter Beatrix and Chef Jason Lynch.

His son, Jurg Stutz, is the European trained winemaker.  Jurg is often in the forefront of trying  new varietals and blends  and has also had great success with fruit wines like his new Haskap sparkling wine and his apple dessert wine, Pomme d’Or which recently received the Pmme d’Or award at the Apfelwein im Roemer event in Frankfurt Germany..

We stayed for lunch in the Pergola restaurant, while I tried to counteract the effect of sipping over 30 wines with a robust fish chowder and a glass of water. 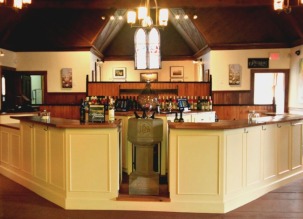 The forty minute cross country drive took us past fields of apple blossoms to our next stop, Avondale Sky Winery . The winery is in the historic St. Matthew’s church which was floated across the  Minas Basin from Walton to its current site in Newport Landing. Winemaker Ben Swetnan has a sense of adventure with over 27 wines currently available from icewine to sparklings. I didn’t even attempt to try them all. 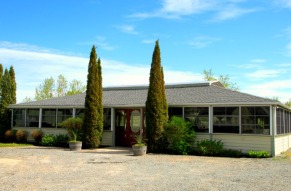 The reception hall at Sainte Famille

More country roads led us to Ste Famille  Winery in Falmouth, the oldest of the current Nova Scotia wineries founded in 1990. Suzanne Corkum owner/winemaker now shares the duties with Tony Barkhouse who handles the heavy work. Sadly it was closed that day, but I could see a huge addition to the winery with a large event hall for weddings and receptions. I had to stop at the NSLC to buy her legendary Baco Noir and Geisenheim

Gina Haverstock with a flight of Devonian Coast Tidal Bays.

On my second day, I resolved to be more selective. I firmly told  Gina Haverstock, the winemaker at Gaspereau Vineyards one of three wineries owned by Devonian Coast,  that I only wanted to taste five of what she felt were her best. First she gave me a flight of Devonican Coast’s three Tidal Bays from the  Jost, Gaspereau and Mercator. Gaspereau’s Muskat is absolutely the best anywhere. and their famous Luci Kuhlman  rosé and red were must tastes.  She insisted I try the riesling, a hard wine to produce in Nova Scotia. She’s also won medals for her sparklings. I did manage to say a definite no to the maple icewine. Thank goodness for a hearty English breakfast at the Blomidon Inn.

At L’Acadie Vineyards, Nova Scotia’s first certified organic and vegan winery.. I got a warm welcome from owner/winemaker Bruce Ewert. Bruce was the trailblazer for traditional method sparkling wines in Nova Scotia and he now teaches this at the NS Community College Oenology program.  His Prestige Brut has been widely recognized and he’s added a cuvée, and sparkling rosé to his line up of bubbly.

On my last visit in 2013,. I’d bought a bottle of his 2010 Alchemy an appassimento wine made from dried red grapes. I’d opened it with friends two days before we arrived and everyone had raved over the intense flavours. His 2013 Passito wine is a variation on alchemy, taking a regularly fermented red wine and doing a second fermentation over dried grapes of the same varietal.

The visit morphed into a wine tourist’s dream. We had a vertical flights of  bottle, tank and barrel tastings of appassimento and passito wines from several seasons that were still being aged.

I haven’t had such  fun at a winery since I took my cousin to Long Dog  Winery in Prince Edward County (see blog Rot is a Good Thing). I had to have a long leisurely lunch of lobster poutine at the Port Gastro Pub in Port  Williams  before heading for the next stop.

View from the deck of Planters Ridge

After lunch, we had our first visit to Planter’s Ridge . The winery opened about four years ago. Owners, John McLarty and Lisa Law retired from professional lives in Ontario, he as a chemical engineer and she as an accountant. Both were avid wine tourists and they chose to turn their passion into a second career. They purchased this 7.5 acre property which had a large 150 year old barn.  No expense has been spared to renovate it to meet the needs of a modern winery.

With the supervisory advice of  Natalie Spytkowsky  and Darryl Fields of Vines to Vintages in Jordan Ontario, John has learned to turn his chemical engineering knowledge to winemaking skills. State of the art equipment have helped to produce crisp clean wines including Riesling, Chardonnay and Pinot Noir as well as the local hybrids Their specialty wine is mead, sourced from local honey. They even have a sparkling mead.

Our final stop was at Blomidon Estates Winery, a long time favourite. Its winemaker Simon Rafuse, is something of a celebrity and he can turn Baco Noir into a thing of beauty and his l’Acadie has always been particularly vibrant.

New tasting room and deck at the rear of Blomidon Estates Winery.

This was in his early days. Today he’s one of the most successful producers of Chardonnay and is having a lot of fun experimenting with sparkling wines and an appassimento style late harvest chardonnay.. Blomidon wines have been served at several  international events in Europe. As attraction to its wines has grown, so has the winery. In the last year, it has  reversed its orientation and added a large new tasting room and deck on the rear of the building with a spectacular view of the Minas Basin. Charcuterie lunches are now available with a glass of wine.

I didn’t get to Benjamin Bridge but no visit to Nova Scotia would be complete without picking up a couple of bottles of their Nova 7. (See my blog Its Nova 7 Time.)

The wine industry continues to expand. Lightfoot & Wolfville are still constructing their winery, although their certified organic and biodynamic wines are already making a splash on the market.  The owners Michael and Joscelyn Lightfoot have big dreams for the future 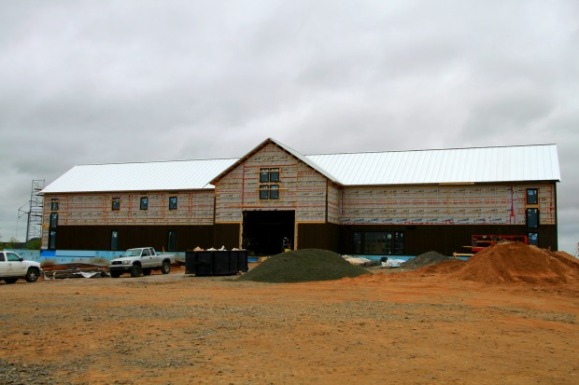